How much do apps cost?

If I need some work done on my car or house I generally have no idea how much it’s going to cost. Unless I get a number of different quotes, I feel a bit in the dark as to whether I’m getting good value for money. The same would be true if it involved many areas in which I have limited or no knowledge.

For many people having software developed is just the same. Unless you run a tech company, and have experience with freelancers or agencies developing a specific type of software, cost is something which can be an unknown.

The cost to have an app developed comes down to how much time it’s going to take. Most freelancer or agencies will charge on a per day basis. A good freelancer with extensive experience of developing mobile apps may charge £350 - £400 per day, an agency at least double that.

So the question now becomes “how long does it take to develop an app?”. 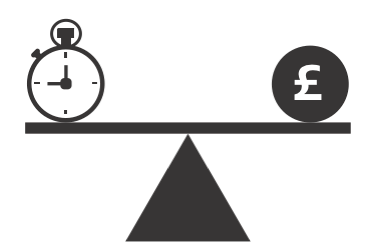 Having an app developed is not just hiring someone to sit down and write some code. To get the best results you are going to need expert help at each stage of the process.

A typical journey, from the initial idea being tossed about in your company to having something on the App Store and/or Google Play:

Ideally the freelancer/agency will be involved during each of those steps, or certainly from step 2 (after they’ve reviewed and discussed the outcome from step 1).

As you can see there is a lot which can change from the initial idea to actually what ends up in the hands of your customers.

I’ve worked with clients on fixed price projects and projects where we agree a day rate and go from there.

For some projects it’s possible to give a fixed price, based on your app having similarities to other projects with relatively few unknowns. Sometimes I’ll complete the work in slightly less time than budgetted, sometimes slightly more - but whats included will be decided relatively quickly in the process. If new features or big changes are required after the price has been agreed, then additional budget will be required. For projects where there is an amount of uncertainty at the start, then fixed price is probably not the right choice - e.g. you want a next-gen video editing app.

The title of this post is “How much do apps cost?”. Lets give an actual example with costs.

This example is for a fictional loyalty app for a chain of car mechanics. They already have a website which allows customers to book their car in and see past and future bookings. The website is relatively new and has a RESTful web service available, which is suitable for use by the app. The website developers have been briefed on the project and will be able to add any additional requirements before mobile app development starts.

Here is a summary of the likely costs for this project:

The total - 82.5 man days. Assuming an agreed day rate of £375/day then the mobile app project cost would be £30937.50. For the project above it’s possible that a fixed price could be agreed. On top of this would need to be added the UI designer and server side development, together with any internal costs to your company. This example is for native iOS and Android apps written in Objective-C/Swift and Java. The costs would be lower if a Xamarin solution was deemed appropriate.

The above estimate makes a number of assumptions about whether standard iOS/Android UI components are to be used (in this case very little highly custom UI) and the complexities of working with the web service. It’s important to make sure that the user stories capture what the app will need to do - e.g. if you need users to be able to share content, make sure that is stated upfront.

The elapsed time from development starting to everything being finished is likely to be more than 82.5 days. It will depend on how much time you have to put into the project, how many stakeholders are involved, and potential risks for delay (such as the serverside developers not completing changes on time or artwork not being agreed). Putting the project schedule together is something that the developer and client would work on closely together. It would be regularly reviewed. The important thing is to be realistic and not too optimistic when promising delivery to your boss!

The above should give you a good idea of what is involved in creating an app, and how much time it can take and what sort of costs are involved.

If you are thinking of having an app developed then Apps On The Move may be able to help. Get in touch via the contact form to arrange an initial discussion.

Prev
Trunk Notes, Night and Day
Next
Your own Trunk Notes settings page